In the past, Tumeric (Curcuma longa) had been known as popular spice as well as traditional medicine which helps in medical treatments of illnesses such as dermatologic diseases, infection, stress, and depression. 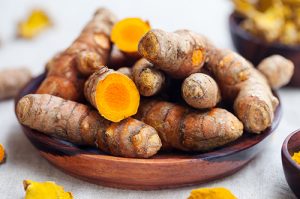 Scientists revealed that Curcumin, a polyphenol and a main major component in turmeric undertakes the ability of anti-oxidant, anti-inflammatory, antimicrobial and numerous medical treatments in our body such as:

• Gastroprotective action: A study on rats was conducted, the result showed a possitive outcome when the number of rat having ulcer was reduced remarkably and the total gastric juice was under control. [1]

• Hepatoprotective effect: After 2 months using 1000mg/day in 2 divided doses of Curcumin, serum levels of AST and ALT were reduced by the end of trial in the curcumin group but elevated in the placebo group. [2]

• Support tumor treatment: Accumulating evidence suggests that the mode of curcumin-induced cell death is mediated both by the activation of cell death pathways and by the inhibition of growth/proliferation pathways. [3]

However, because of natural compound’s characteristic, Curcumin is hardly dispersed in water and poorly absorpted in intestine:

• The gastrointestinal tract slightly absorbs curcumin with the solubility at its maximum level of 11ng/ml in plain aqueous buffer pH 5.0 which causes which has a very low therapeutic effect

In order to overcome these disadvantages, Nano Technology is studied and applied into Curcumin to solve this problem. With Nano Technology, the bioavailibility and application range of Curcumin are both increased: 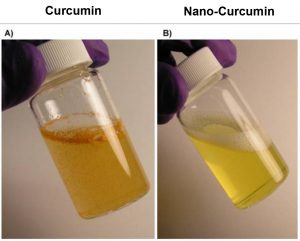 • The absorption of Nano Curcumin in body is 185 times higher than original Curcumin. [4]

• Bioavailibility and pharmarceutical kinectic is boosted, thus the possitive outcome in medial treatment is enhanced.[4]

• Despite of nano scale, Nano Curcumin is considered as safety to use in oral administration. [5]

• Nano stureture limits the degradation of Curcumin by surrounding environment.

The application of nanotechnology has brought special properties to curcumin. The increase in absorption of Curcumin in the body helps minimize the time to treat diseases and save money. Besides, adding Curcumin to the product will not be a difficult problem for the manufacturer.

Comparision between Curcumin and Nano Curcumin 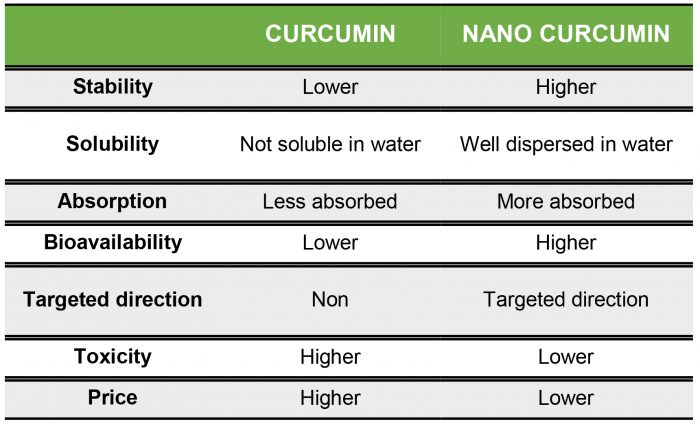